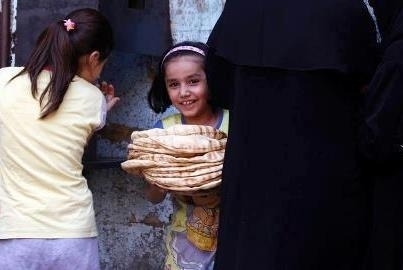 The Islamic State (ISIS) has raised the price of bread to 12.50 SYP per loaf, an unprecedented high in Raqqa province, with families facing the possibility of being unable to secure their bread. Bread was priced at 4 SYP prior to ISIS taking control of the province, shooting up to 6.25 SYP in previous months.

Residents in Raqqa purchase bread packages from bakeries priced at 300 SYP, with each package containing 24 loafs of bread, according to the Raqqa is Being Slaughtered Silently campaign.

Bread is considered the staple food for the people of Raqqa province, which consumes about 520 tons of flour daily, with the city’s population consuming around 270 of those tons. Most of the countryside is currently forced to rely on the manual production of bread due to the high prices.

When ISIS seized Raqqa, flour consumption dropped to 120 tons per day, while the number of bakeries in Raqqa dropped to 31, two more dysfunctional bakeries were relocated from the countryside of Aleppo. Public mills are also operating with a lower production capacity, while flour produced in private mills dominated by ISIS is being transported to Iraq.