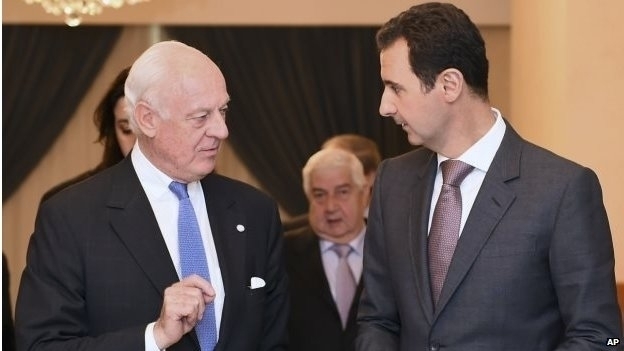 Speaking to United Nations special envoy for Syria Staffan de Mistura in Damascus on Tuesday, President Bashar al-Assad said the world must realize the threat posed by terrorism to its security and stability.

The comment comes after terrorists shelled civilians with rockets in Aleppo on Monday, killing 23 with the number of victims likely in the coming days.

The state-backed terrorism facing Syria has been a major talking point with UN officials recently, as the Syrian government continues to stress the importance of restoring security to Syria while preserving its sovereignty and territorial integrity.

President Assad demanded the world assume a ‘clear’ and ‘bold’ stance against all who fund, arm and facilitate the movement of terrorists in the region, making it clear that remaining silent in response to terrorist crimes will encourage further acts of terror.

The UN envoy explained that his visit to Syria aims at updating Assad with the results of the recent consultations held in the Swiss city of Geneva.

De Mistura began consultatative meetings in early May, to which a delegation from the Syrian government was invited along with 40 Syrian and 20 international parties.

Consultation talks held separately with different sides at the United Nations headquarters in Geneva, away from media coverage. The preliminary stage of the consultations was expected to last for five to six weeks.

De Mistura added that he intends to discuss with Assad the next steps that need to be taken in order finalize his report on Syria, which the UN envoy aims to submit to the Security Council by late July.

Both officials agreed to continue consultations in order to find an effective political solution to the crisis in Syria, while helping restore security and stability to it.