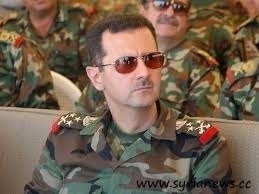 President Bashar al-Assad has extended his heart-felt congratulations to the Syrian army on the occasion of the 70th anniversary of the founding of the Syrian Arab Army.

Addressing the army through Jaish al-Shaab (Army of the People) magazine, the president said that the armed forces held up a shining example in giving, sacrifice and loyalty to the Syrian homeland.

The president added that the Syrian army has risen to the challenges presented by Syria’s four-year terrorist war, showing unwavering resolve and willingness to offer whatever sacrifices it takes to preserve the Syrian land and heritage.

“Because you embodied an example in defending the homeland and preserving the integrity of its people, the Syrian people have stood side by side with you to repulse the aggressors and to express their pride in you,” added the president.

Since its foundation, the Syrian army has never flinched from carrying out its national duties, thus proving to be worthy of the trust of the Syrian people, Assad said.

The president concluded his address by saluting the army’s heroes and the families of martyrs, saying he highly appreciated “every single drop of blood spilled to protect precious Syria.”