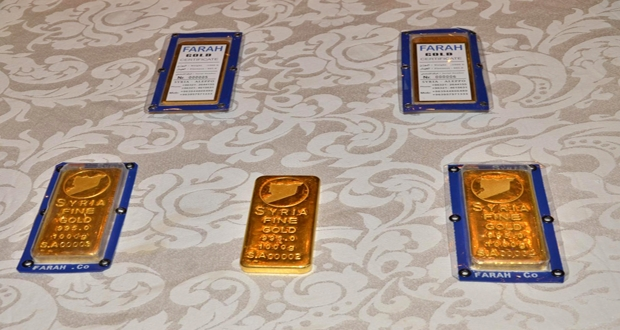 Celebrating the occasion, the association’s chairman, Abdo Mousalli, said that this is the first time a 1 kg gold bar has been made inside Syria. The new 24-karat gold bullion bar is 12 cm long, 5 cm wide and 1 cm thick.

According to Mousalli, Syria is ranked first among countries in the Middle East and 15th internationally in terms of production of the 1 kg gold bar.

“This is a sign that the national economy is still strong,” he said.

A picture of the Syrian map is featured on the bar, with the word “Syria” and the English letters ‘S’ and ‘A’ printed below it, in reference to both Syria and Aleppo.

Mousalli estimates the value of the new gold bar at approximately SYP 10.7 million.

Goldsmith George Farah said production of the bar took around a year, and it was carried out in cooperation with the Central Bank of Syria, noting that 25 to 50 1 kg gold bars can now be produced daily.