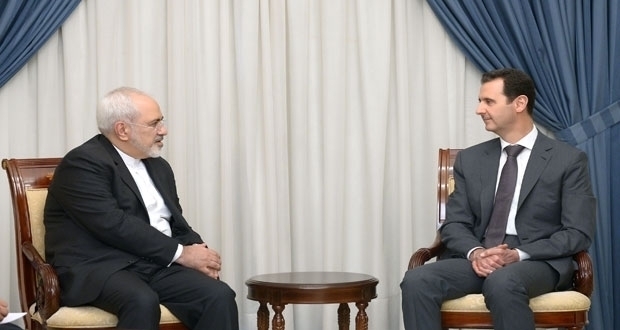 President Bashar al-Assad Wednesday received Iranian Foreign Minister Mohammad Javad Zarif in the Syrian capital to discuss the threat of terrorism and exchange views on the means to a peaceful solution to the crisis in Syria.

Zarif stressed the Syrian people’s will must be the basis of any resolution to the crisis, in a way that preserves Syrian territorial integrity and its independence away from any foreign interference.

The top diplomat also affirmed Iran’s determination to support the Syrian people and ease their suffering as a result of the four-year civil war.

Assad thanked the Iranian government and people for their enduring support and the sincere efforts made by Iran and other friendly countries to end the war in Syria and preserve its sovereignty and territorial integrity.

The two senior officials stressed that all countries inside and outside the region must realize the danger of a metastasizing terror risk, calling for international coordination to face the threat.

The Syrian leader also congratulated Iran on its recent nuclear deal with the P5 1 group, stating that Iran reached this historic achievement thanks to the resilience of the Iranian people and their support for their leadership.