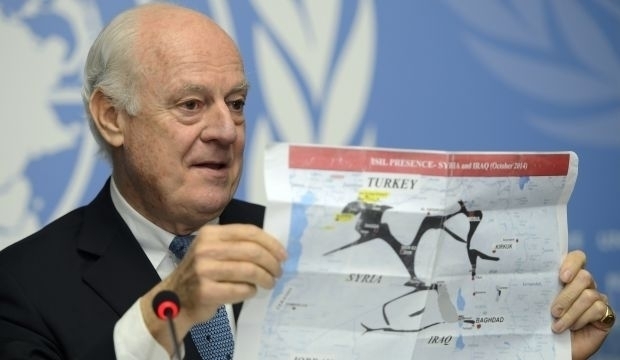 Factions of the Syrian opposition forces issued today a statement announcing their position towards the recent proposal by the UN envoy to Syria, Staffan de Mistura, citing several conditions in opposition to the plan, most notably the unconditional departure of President Bashar al-Assad.

"Representatives of the revolutionary factions met to discuss the presidential statement of the Security Council issued on August 17, 2015 and the plan presented by UN Special Envoy to Syria, Staffan de Mistura. The representatives stressed that the Security Council's statement offers a suitable environment to initiate substantive political negotiations and to build confidence between the parties," the statement said.

According to the statement, these factions reject a number of points in de Mistura's plan, stressing that any political process should require the departure of Assad and all the pillars of his regime, where none can have a place or role in the new Syria or the transitional phase.

The opposition factions welcomed the initiation of a political process leading to a political transition in accordance with the Geneva statement, which includes the formation of a transitional governing body with full executive powers, including the powers of the president.

The factions called on de Mistura to proceed with the implementation of the Geneva statement under regional and international guarantees, without resorting to lengthy procedures which would consequently discharge the Geneva statement from its content – in reference to the four working groups included in UN envoy's plan, as the opposition considers the formation of these groups a waste of time.

The factions rejected Iran's participation in any consultations on Syria, demanding the application of Resolution No. 2139, which calls on all parties to cease any attacks against civilians and any random use of weapons in populated areas, including indiscriminate shelling with missiles and explosive drums, as well as an immediate end to the arbitrary detention, torture and kidnapping.

The factions concluded the statement by stating, "the blatant Russian intervention in Syria undermines the efforts of a political solution," calling for the United Nations and the Security Council to assume their responsibilities towards the Syrian tragedy and work to implement the relevant resolutions in order to serve the interests of Syrian people.