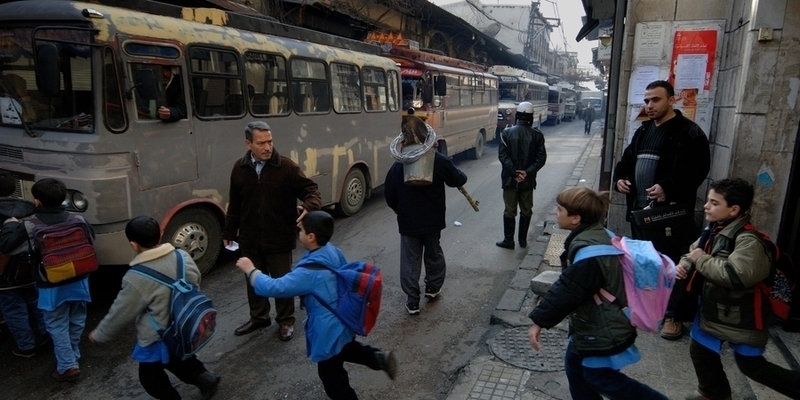 Around 25,000 students in the northern countryside of Homs city returned to school on September 13, with 90 percent of students attending schools in regime-controlled areas, while the rest enrolled in schools run by the opposition's interim government and other local NGOs.

According to local families, the cost of materials for one school student this year has reached about 10,000 Syrian pounds, while the city continues to suffer from dire living and economic conditions due to the siege inflicted by the regime for almost four years.

A Zaman al-Wasl correspondent reported that prices of school stationery and bags have increased over 50 percent on average, sometimes exceeding double the regular price.

Om Hossam expressed her astonishment at the hike in prices, as some university books have risen 1,000 Syrian pounds, while a good quality school bag sits at 4,000 Syrian pounds. Uniforms are still widely unavailable in the northern countryside for the third year in a row, activists said.

Om Hossam said that school costs vary depending on students’ year level, the overall cost for primary school students ranges from 8,000-10,000 Syrian pounds, while for secondary students it can cost over 13,000 Syrian pounds: 7,000 for clothing and shoes 3,000 for stationery, with the rest going towards a decent school bag.

Ghassan, the owner of a stationery shop and a library in the northern countryside of Homs, explained that many factors are behind the rise in prices of school materials, particularly stationery. According to Ghassan, the cost of imported white paper is one of the most expensive items, as paper prices are linked to dollar rates, which fluctuate and rise sharply. Another reason is the difficulty of transporting materials to the besieged northern countryside.

Ghassan says stationery prices have risen between 30-40 percent this year, while the price of an average school bag has doubled. A bag that was sold for 750 Syrian pounds last year now sells for 1,500 Syrian pounds, he said.

Father of six, Abo Zuhair, told Zaman al-Wasl that he paid 50,000 Syrian pounds to prepare his children for school with clothing and poor quality bags.

The 2015/16 academic year commenced in the month widely known as ‘disaster month’ – so named due to the high spending on stored food – and coinciding with the celebration of Eid al-Adha. Available finances are often stretched thin at this time, with the demand for money increasing the burden on families amid difficult living conditions and high unemployment, reaching up to 70 percent by some estimates.

One father who spoke to Zaman al-Wasl during its tour of a stationery market in Kafer Laha, mentioned for the past two years the interim government’s Ministry of Education, in collaboration with the Aid Coordination Unit, had distributed stationery, pens and school bags to 90 percent of students from the northern countryside of Homs.

The parent noted the program was a successful incentive for students to join schools in order to receive a school bag, pencils and books, reducing the burden on unemployed parents. But the father said he was surprised to discover that the support was discontinued this academic year.

A large number of children in villages and towns of northern Homs did not return to school this year due to the wide scale destruction by the regime’s shelling over the past two years. Many school children, up to 25 percent, have since left schools to work in order to help their families survive.