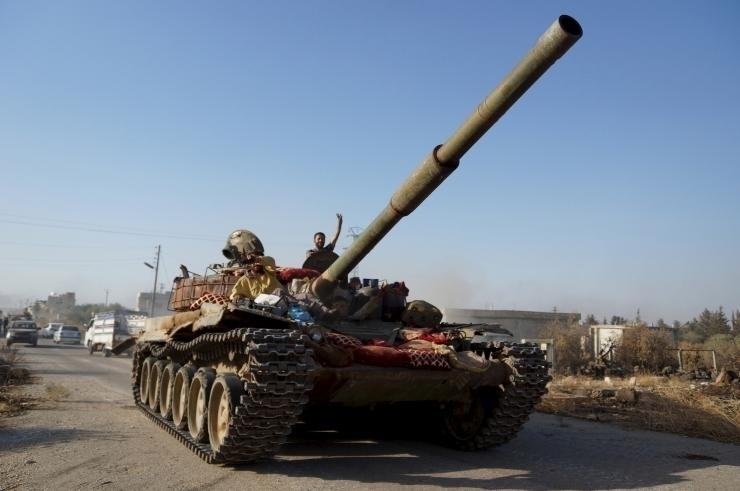 The province of Hama is reportedly witnessing the largest military escalation of its kind since the outbreak of the Syrian revolution in March, 2011. Assad forces and its allied foreign and local militias are leading the battle on the ground under the air cover of Russian fighter jets.

What is the purpose of the battles in Hama?

The course of operations and the ongoing battles in the region have revealed the intention of Assad's forces in tightening their grip over main opposition-held towns in the area. Regime forces have adopted the strategy of attacking two main axes simultaneously – the first extending from Maan to Atshan and its surrounding villages to at-Tamanah in the southern countryside of Idleb; the second extending from Mughir toward Kafrnboda to Alhbit, also in the countryside of Idleb. The plan was confirmed by leading figures in the Free Syrian Army (FSA).

Russian officers are supervising ground operations in the city of Khan Shaykhun and its surroundings, including al-Khazzanat and as-Saiad, in an attempt to eliminate the threat of the two main opposition-held cities in the countryside of Hama: Latamneh and Kafr Zeta.

But FSA and armed opposition leaders denied the likelihood of the plan’s success. Commander of the FSA-linked Soldiers of Damascus Brigade, Abu Walid, said: "regime losses will force them to stop at a certain point, and then the rebels will launch a counter attack."

Who are fighting alongside Assad's forces?

Lebanese sources confirmed on Saturday the death of Hezbollah leader Hassan Hussein al-Hajj (Abu Mohammed) in Ghab Plain, after attempts by the militant Shiite group to storm Mansoura village, signifying the participation of Hezbollah in the battles in Hama.

The National Defense Force (NDF) militias are also playing a decisive role in supporting Assad's forces. The pro-regime Homs News Network reported via its Facebook page that a military decision issued by security leaders in Damascus on Thursday led to the relocation of scores of NDF fighters from Homs and local pro-regime militants to fronts in Hama.

Other militias, including Nusur az-Zawbaa (the military wing of the Syrian National Party), Syrian Hezbollah and Baath Brigades, have also participated in operations.

The attack, according to military observers, is being conducted under the supervision of Russian experts in two operation rooms in Hama and Lattakia, in coordination with the Iran. The Syrian regime army divisions participating in the attack are: Armored Brigade 47, the Fourth Brigade and the Special Forces.