"The dates are not sacred, and we will not go to any negotiations while our people are suffering from bombardment, starvation and blockades" 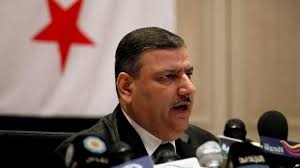 The General Coordinator for the High Committee for Negotiations, Riad Hijab, said that “exchanging political positions for Syrians’ suffering is an act of base extortion, which we will not accept under any condition.”

Hijab said in a statement on a social networking website that “the dates are not sacred, and we will not go to any negotiations while our people are suffering from bombardment, starvation and blockades.”

The statement came as the High Commission for Negotiations held its third meeting in the city of Riyadh on Tuesday, aiming to review the results of the tour which the coordinator, Riad Hijab, and an accompanying delegation made to a number of Arab and European capitals.

This aims to secure a political transition in Syria and bring a pluralistic regime to the country, which will represent all constituencies of the Syrian people, without discrimination or exclusion, by establishing a transitional governing body enjoying full executive powers, with the assurance that Bashar al-Assad and his ruling clique will depart at the start of the transitional phase, and will not be present in the transitional phase or afterward.

The paper noted the need to preserve the territorial integrity of Syria and maintain its state institutions, restructure and reconstitute security and military institutions, fight terrorism in all its forms, and create a clear executive framework for accountability and transitional justice.

Before the meeting was convened, Hijab said the paper stipulated the need to prepare an appropriate environment for talks, especially with regard to ending the siege of blockaded cities and areas, empowering humanitarian agencies to deliver aid to all of those who need it, releasing all prisoners, and ending air and artillery bombardment and attacks against civilians and civilian targets. It also stipulated that all parties immediately abide by their commitments with regard to international law, including international humanitarian law and international human rights law, as well as stopping forced displacement and halting the execution of death sentences.

Hijab said that trust-building measures in the following stage will include stopping all military operations and guaranteeing the return of refugees and displaced people to their areas, and putting in place a UN mechanism to monitor the ceasefire and ensure all parties adhere to it.

Following the meeting held by the High Commission for Negotiations, in which it was expected that the contents of the proposed agenda for the committee and its negotiating body would be announced, a group from the committees, factions, and civil society institutions requested that the general coordinator for the committee to suspend all activities related to the negotiating process until the signatory nations to the Security Council resolution 2254 implement its provisions, especially articles 12 and 13, related to ending the blockade of  besieged areas, empowering humanitarian agencies to deliver aid to all those who need it, releasing all prisoners, and stopping air and artillery bombardment and attacks against civilians and civilian targets.