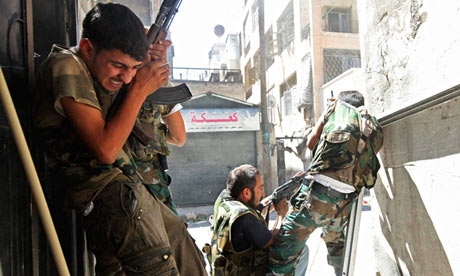 Sources revealed an agreement between rebel formations and Jaish al-Thuwar to allow the the group to enter villages of the northern countryside of Aleppo in order to protect them with US-led coalition air strikes, also thereby excluding the towns from Russian raids because they do not target areas under the control of the Democratic Forces.

A Zaman al-Wasl reporter mentioned that fighting formations found themselves surrounded from three sides after the road between Aleppo city and the northern countryside was cut by the regime and Hezbollah fighters, seizing control of the villages of Dwer Zaytoon, Maarast Khan, Mayer and Rityan.

A large number of rebel groups in the northern countryside were forced to secretly join Jaish al-Thuwar in order to protect their villages and towns from the Syrian regime’s forces from one side, and from the Islamic State group on the other, a commander of the Free Syrian Army explained to Zaman al-Wasl.

On the other hand, many rebels have refused to join the the Democratic Forces, citing its resemblance to the regime army, preferring instead to operate in smaller independent fighting groups in villages and towns adjacent to Azaz.

Omar Mariamini, one of rebels who refused to join the Democratic Forces, formed a small fighting group with other rebels with whom he shared his attitude toward the SDF.

Mariamini confirmed that many people in the northern countryside have also done what he did because, in his opinion, a rebel should not abandon his principles.

“I expect in the future after defeating the Islamic State, a forced reconciliation with the regime would take place, like what is happening these days, as rebels had reconciled with the Kurdish militias within Jaish al-Thuwar. I prefer dying than shaking hands with those who killed my people,” Mariamini said.