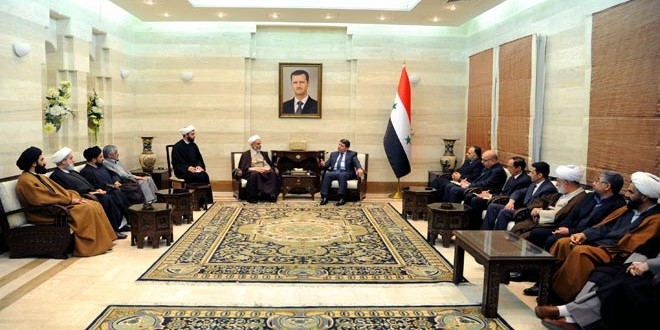 Prime Minister Wael al-Halki met with the head of Iran’s Endowments and Charity Affairs Organization Hojat-al-Islam Ali Mohammadi on Monday to discuss the possibility of expanding cooperation in cultural and scientific sectors.

The meeting touched on implementing new joint agreements, means to develop religious tourism and facilitating procedures for the visits of Iranian pilgrims to holy sites in Syria, and exchanging religious missions.

Halki stressed that the cultural, intellectual, and religious ties that bind the two countries and their people have helped strengthen their historical relations and the political strategy.

The PM reaffirmed that the Syrians alone will resolve the crisis without any interference or external interference, hailing Tehran’s positions towards Syria.

For his part, Mohammadi said the Iranian people are standing side by side with the Syrian people and leadership in confronting the terrorist war imposed on them, pointing out the battle is a war on Islam and seeks to undermine the security of the whole region.