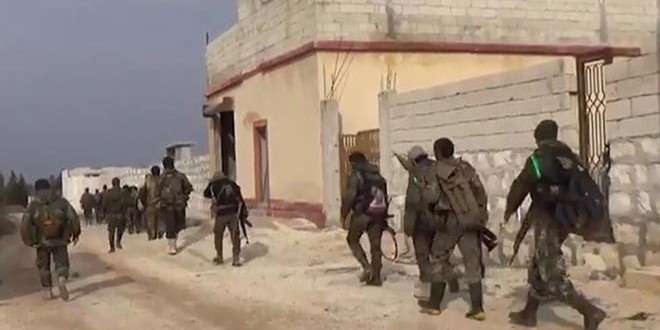 The Syrian army continued its fight Thursday against terrorists of the Islamic State group and Nusra Front in several provinces, successfully restoring security and stability to a number of areas.

In the northern province of Aleppo, army units captured the town of Khanaser in the southeastern countryside of the province after eliminating the last remaining gatherings of ISIS forces in the area.

A field source told SANA that army units carried out the military operations over 48 hours against ISIS fortifications and hideouts after the fighters infiltrated Khanaser on Tuesday.

It added that the operations resulted in restoring security to the strategic town and inflicting heavy losses upon the militants.

A military source affirmed that a series of air strikes were launched by the air force against militants in Palmyra city, Bier al-Afaai and Mahsa in the eastern and southeastern countryside of Homs, destroying three ISIS positions and a number of machine gun-equipped vehicles.

In the northern countryside of Homs, air strikes inflicted heavy losses upon the terrorists and their equipment in addition to destroying a Nusra site in the town of Talbisa in the north of Homs city.