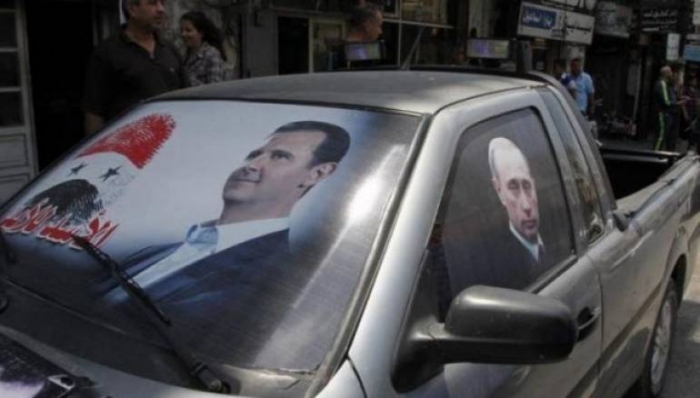 A large number of regime loyalists who received the Russian warplanes and forces with open arms continue to live in a state of denial following Moscow’s announcement to withdraw from Syria.

Despite the scale back of Russian forces from Hemeimim military base, indicated by a significant decrease in the number of flights and air raids, many loyalists claim that Russia’s presence in Syria still exists.

“There are still lots of airplanes and more than 200 Russian soldiers in Hemeimim base and they are able to defeat the terrorists,” a guard at the base said worriedly.

He expressed his fears for the future and what would happen to Qardaha, President Bashar al-Assad’s hometown, as the Russian warplanes can rarely be heard or seen in the sky.

Lawyer Mirhj Hassoun expressed his hopes that Russian forces would live up to Putin's word and redeploy to Syria within a few hours if needed. However, he was not able to hide his anger towards the new situation: “Hezbollah started withdrawing from Syria and the army is too exhausted and can find almost no one able to fight.”

Restaurant owner Abou Jaafer is also struggling from the effects of the withdrawal, but for a different reason, as he depended on Russian soldiers who would regularly dine in his restaurant, even recruiting a cook who specialized in Russian food. “When we started earning from serving the Russian soldiers, Putin, the bear, decided to withdraw. I have paid $1,000 for the cook; they must compensate me or take him back home.”

A high-ranking officer in the marine forces in Jableh revealed that 35 airplanes left Hemeimim base along with 700 Russian soldiers. He said that the Russian withdrawal has left a noticeable change that people in Lattakia have felt.

On the other hand, pro-regime shabeeha militias expressed their relief after the Russian drawdown.

“I wish Russian soldiers would go to hell. They wanted to bully us, but they do not know that we can bully the whole world,” said Osama Khadour, a retired officer and shabeeha commander, according to the Lattakia News Network Facebook page.

Russia's withdrawal from Syria has sent a strong message to Assad, after Moscow dramatically turned the tide of war in the regime’s favor with five months of intense bombardment targeting the opposition.

Although its declared goal was to fight Islamic State militants and other terrorists, much of the Russian campaign has targeted moderate rebels and helped eject them from core areas considered strategic for the regime, like Idleb and some areas of Aleppo.

Militarily, the implications of the Russian move are unlikely to hurt Assad as long as Iranian-organized Shiite militias continue to fight on his behalf. Russia, which is keeping its naval base in Tartous and air base in Lattakia, may also redeploy at any time if needed.