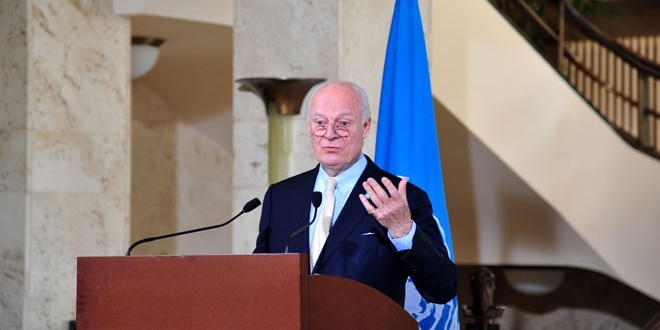 UN Special Envoy for Syria Staffan de Mistura has stressed the importance of continuing to deliver humanitarian aid to people in need in Syria in light of the holding ceasefire deal.

In a press conference following his meeting with the Humanitarian Task Force of the International Syria Support Group (ISSG) in Geneva, de Mistura said: “Given that the cessation of hostilities agreement is still holding in Syria, we hope that the amounts of humanitarian aid would increase.”

He pointed out that around 56 tons of humanitarian aid had been successfully delivered through airdrops to Deir-ez-Zor, which is besieged by the Islamic State group, adding that the Syrian Red Crescent is distributing aid to citizens throughout the area.

In a relevant context, de Mistura hailed the Russian efforts in clearing the archaeological and historical part of Palmyra city of mines and explosive devices left behind by ISIS terrorists.