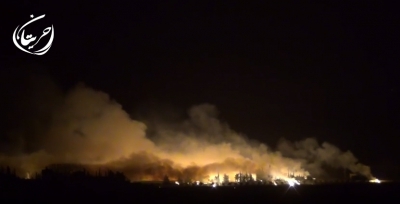 Russian warplanes have begun a campaign of heavy bombardment on the towns and villages of the northern Aleppo countryside, some points of the western countryside, and Castillo Road, using internationally banned munitions in dozens of air raids causing major material damage and sparking massive fires.

Activists said that towns and villages in Aleppo’s northern countryside were subjected to more than 50 air raids with incendiary phosphorus, causing large fires to break out, turning night into day, while warplanes bombed the outskirts of the al-Malaah area, the city of Andan, and the villages of Kafar Hamra, Babees, Maarat al-Arteeq, Tel Maseebeen, and Heyyan.

The city of Aleppo and its countryside have witnessed an extreme and barbaric bombing campaign throughout recent months, with Russian warplanes and helicopters carrying out thousands of raids using all types of weapons, including vacuum and cluster bombs, leading to massacres and leading to hundreds of deaths and injuries among civilians. Vital facilities have been targeted, as well as civilian assemblies and medical facilities.