Chechen representative says more aid will be distributed in Suweida, Aleppo city and Palmyra city in the coming days 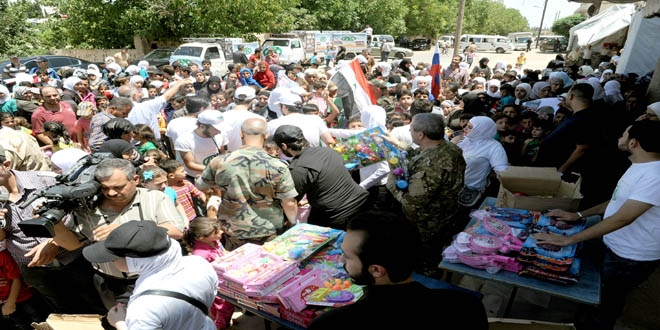 A batch of humanitarian aid from Russia’s southern province of Chechnya was distributed on Wednesday among displaced families from Daraya city living in the Damascus countryside.

In a statement, Chechnya’s representative in Russia's upper house of parliament, Ziyad Sabsabi, said that the aid is offered by the Chechen Ahmat Kadyrov Charity Foundation under the direction of President Ramzan Kadyrov and includes basic food items and children’s toys.

Sabsabi pointed out that more aid will be distributed in Suweida, Aleppo city and Tadmour (Palmyra) city in the coming days.

“The aid distribution will continue and we are thinking of establishing a medical center and an educational center for children,” he added.

Marwan Abeid, the head of Daraya City Council, said that Shawaqa farms, which are located between Daraya and Sahnaya in the Damascus countryside, currently house more than 9,000 displaced persons from Daraya.