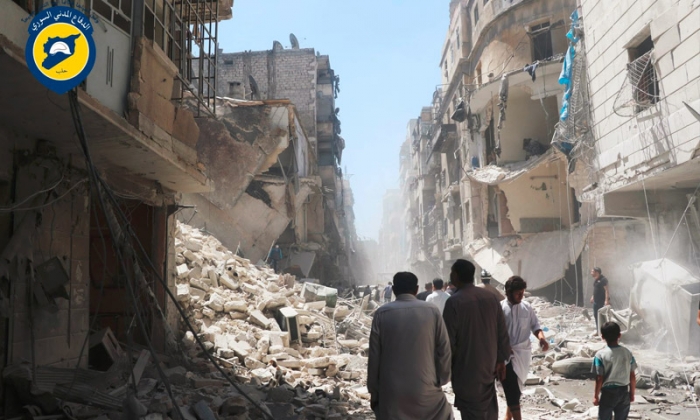 Enab Baladi’s correspondent in Aleppo said that the helicopters dropped a number barrel bombs on the district, killing and wounding civilians.

The civil defense in Aleppo confirmed the deaths of five people and the wounding of eight others as the preliminary toll, also inflicting heavy damage to residential buildings in the area. They added that a team was still working on removing those trapped beneath the rubble at the time of writing.

In a related context, a child was killed when a residential building collapsed on its residents following a barrel bomb attack in the Salah al-Deen district. The Aleppo Media Center said that two families were trapped beneath the rubble, while a civil defense force was trying to rescue them.

Helicopters struck the district on Monday with barrel bombs while activists in the city said that the death toll from the attack on the district yesterday had risen to 30 dead and dozens of wounded.

The head of the Abou Omara Brigades in Aleppo, Yassin Najar (known as Abou Ahmed) was killed under the rubble of his house in al-Mashhad. His wife and son were also killed in the bombing.

A number of hospitals in the city went out of service on Saturday as a result of the bombing by warplanes, which have escalated their air strikes against the districts over the last few days.

Assad’s forces have meanwhile advanced and taken control of the Castello resort north of the city, which observes the road from the ground, indicating the siege of the city’s opposition-controlled eastern districts is complete.