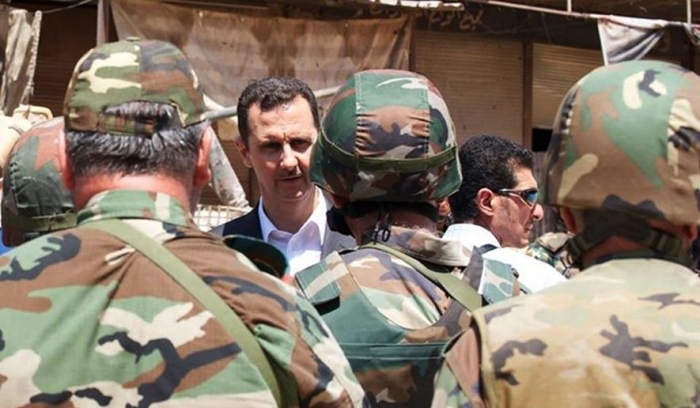 President Bashar al-Assad addressed the armed forces on the 71st anniversary of the Syrian army’s foundation, asserting that the army will always remain the pillar of security and stability in Syria and the region.

In an address published in the Army of the People magazine, Assad saluted the heroics and sacrifices of the armed forces – including officers, noncommissioned officers and civilian workers – which they have offered for more than five years in the face of the most vicious terrorist attacks in the country’s history.

The president also lauded the army for confronting “the projects of hegemony and new and old colonialism, all of which crashed down at the gates of our dignity, invulnerability, cohesion, and steadfastness.”

“As you continue carrying out your national duties with dauntless determination,” he said addressing the army, "you prove that the achievements you made in several areas were not coincidences or transient events; rather they are absolute proof that the Syrian Arab Army is the most capable of confronting terrorism and eliminating it.”

As Syria stands at the threshold to a pivotal stage in its history, the president said, Syrians must be vigilant and prepared until victory is achieved and a bright future is ensured that meets the aspirations the Syrian people.

“Once again I salute you on this dear occasion, and I value highly your monumental effort and your constant vigil over the security of the homeland and your sacrifices for the sake of Syria’s precious soil,” Assad announced.

Concluding his address, the president prayed for the souls of the martyrs who sacrificed their lives for the homeland.