The city’s local council counted the use of eight barrels loaded with napalm on Sunday, in addition to four explosive barrels, which caused heavy material damage and injuries 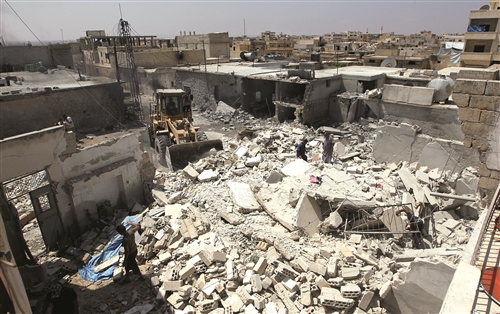 Assad’s helicopters hit the city of Daraya with barrels full of napalm, an incendiary material for the second day in a row, while simultaneously targeting it with mortars and artillery, causing deaths and injuries.

Enab Baladi’s correspondent in the city said that two of the city’s residents had been killed on Sunday, August 14. Others were wounded during the continuous bombardment on the city.

The correspondent said that the continuous air raids and bombardment were accompanied by new attempts to storm the city from the western side. The results of these new attempts are still not known.

The civil defense in the Damascus countryside published a video recording showing its members attempting to put out fires sparked by the napalm barrels for the second day running.

The city’s local council counted the use of eight barrels loaded with napalm on Sunday, in addition to four explosive barrels, which caused heavy material damage and injuries.

Assad’s forces are trying to draw the noose around the besieged people of Daraya, in repeated attacks from the western and southern entrances, with the aim of reducing the area controlled by the Free Syrian Army there.