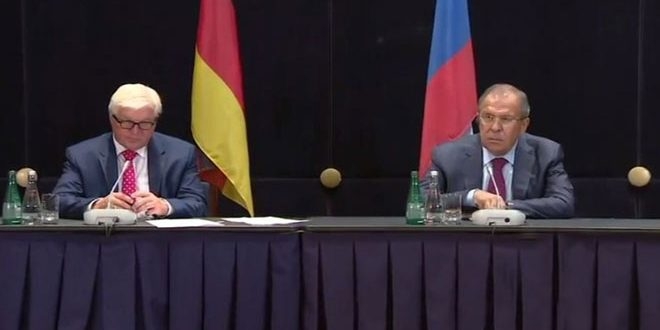 Russian Foreign Minister Sergey Lavrov asserted that Russia will not allow international terrorism to triumph in Syria, and that it seeks to start political dialogue among all parties.

“We believe that it is still necessary not to allow international terrorist entities to prevail here and to ensure the beginning of genuine and true negotiations between all Syrian sides,” Lavrov said on Monday following talks with his German counterpart Frank-Walter Steinmeier in the Russian city of Yekatrinburg.

Lavrov pointed out that Moscow is convinced that Syria’s opposition should distance itself from ISIS and Jabhat al-Nusra, saying “We told our German friends about the steps that we are taking in contacts with the United States. We are convinced that a key goal is distancing the moderate opposition from the ISIS and Jabhat al-Nusra,” adding “This envisages strengthening the cessation of hostilities agreement and solving humanitarian problems in many parts of Syria, mainly in Aleppo.”

“It’s alarming that many so-called moderate opposition members more often coordinate their actions with these terrorists,” he stated.

Both sides also discussed the situation in Aleppo, where Lavrov stated “We hope that with the participation of Russia and the US, other Western countries and regional countries, and the UN we will be able to improve the situation of the civilian population and not allow terrorists to dictate their conditions.”

Lavrov also noted that the situation in Deir Ezzor allows for airdropping humanitarian aid with confidence that it will reach civilians, but in Aleppo there is a risk of it falling into the hands of terrorists. He urged any party that wishes to airdrop aid to coordinate with the Syrian government.

He stressed the need to prevent the use of humanitarian channels for sending supplies to terrorists, noting that terrorist leaders are preventing civilians and fighters from exiting the areas they control through humanitarian corridors, in addition to carrying out public executions of those who wanted to flee or turn themselves in.

Lavrov pointed out that the 72 hour truce that was agreed upon with the Americans resulted in terrorists receiving war materiel and 7,000 fighters, adding that the supplying of humanitarian aid to Syria from Turkey must be monitored by international parties.

For his part, Steimeier called for providing permanent and safe corridors for delivering humanitarian aid, particularly in Aleppo.