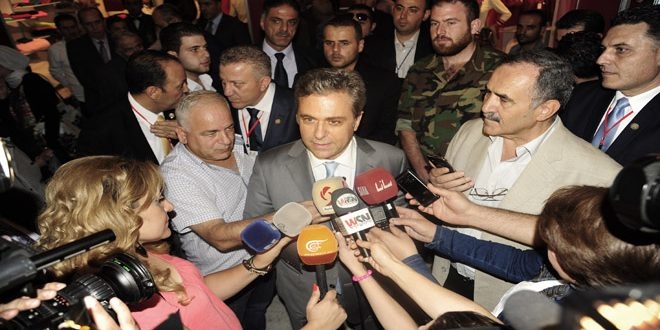 Minister of Economy and Foreign Trade Adib Mayaleh stressed the importance of the 2nd Khan al-Harir expo for fashion and textiles as a reflection of the steadfastness and determination of Aleppo industrialists to continue production and maintain high standards of quality even during difficult circumstances due to terrorist attacks.

During a tour at the expo pavilions, Minister Mayaleh expressed hope that in the near future, similar events will be organized in Aleppo city, noting that a meeting with members of the Aleppo Chamber of Industry is due to be held to tackle all problems and obstacles facing them.

For his part, Head of the Aleppo Chamber of Industry, Fares al-Shehabi said this is the third expo organized by the Industry Chamber after the success of the previous ones held in Damascus and Beirut, adding that it is a message that industry has survived all the destruction, material losses and terrorist attacks on Aleppo city.

Al-Shehabi urged the government to support the industry sector in Aleppo so it can restore its role in the economic development process in Syria, highlighting the facilitations and necessary production requirements provided by the Aleppo Chamber of Industry to ensure a safe environment for industrialists to produce.

Chairman of the Federation of the Syrian Chambers of Commerce, Ghassan al-Qalla’a, expressed hope to reopen the doors for Syrian exports to Iraq and Egypt, noting that other exhibitions will be held in Moscow and Cyprus to showcase Syrian products.

The 2nd Khan al-Harir fashion and textiles expo kicked off on Sunday at Dama Rose Hotel in Damascus with the participation of more than 65 companies specialized in clothing, fabrics, menswear and women and kids wear. It lasted until October 4, 2016.