The Cabinet also approved a draft law amending some provisions of legislative decree No.35 for 2015 on the illegal drawing of energy 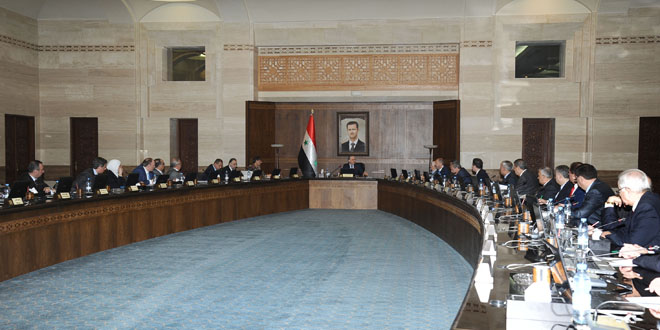 The Cabinet continued discussing the draft state budget for 2017 in both its running and investment sides in preparation for its final approval in its weekly session, chaired by Prime Minister Imad Khamis.

The Cabinet set the preliminary sum of the state budget at SYP 2660 billion, which is distributed as SYP 1,982 billion for running expenditures and SYP 678 billion for investment expenditures, with sums dedicated to social support set at SYP 423 billion.

The Cabinet charged the Ministries of Local Administration and Environment, Social Affairs and Labor, and Tourism, along with the Investment Agency, with drafting a mechanism to establish real development in impoverished and active rural areas and create jobs according to the needs of each area or village.

The ministers also discussed the possibility of establishing a company specializing in exportation from the public and private sectors.