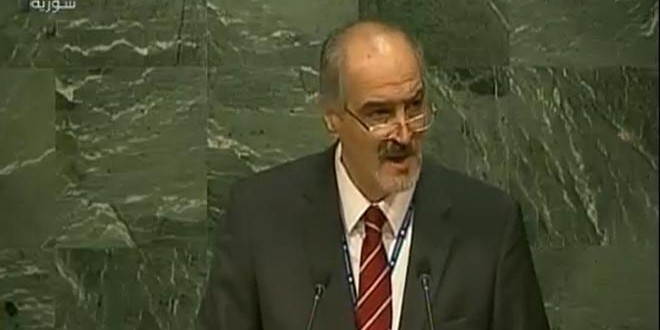 Syria’s permanent representative to the UN on Tuesday stressed that the plague of terrorism will “rebound” on the governments funding it and on other states, stressing that UN member states must prevent the trafficking of weapons, munitions and terrorists across the borders of Syria’s neighboring countries.

Speaking on the sidelines of the 71st session of the UN General Assembly, Dr. Bashar al-Jaafari said that the most dangerous phenomenon threatening the world today is the support, arming and training of terror groups by some states, including UNSC members, adding that these terrorist groups have been known to use chemical weapons.

Jafaari added that the world is facing many challenges, on top of which is the spread of weapons of mass destruction (WMD), as some nuclear states have threatened other states with their use.

The top diplomat renewed his call for UN member states to work on making the Middle East free of nuclear weapons and all weapons of mass destruction.

He said that a number of states have used an August report by the Joint Investigative Mechanism on the use of banned weapons to defame Syria, despite the report excluding any sufficient evidence on Syria’s use of chemical weapons.

Jaafari added that the report mentioned that the proposed videos on the accident of Talmenes in Maarat al-Numan were filmed on April 23, 2014 while the alleged accident took place on April 21, indicating that the video evidence was fabricated.