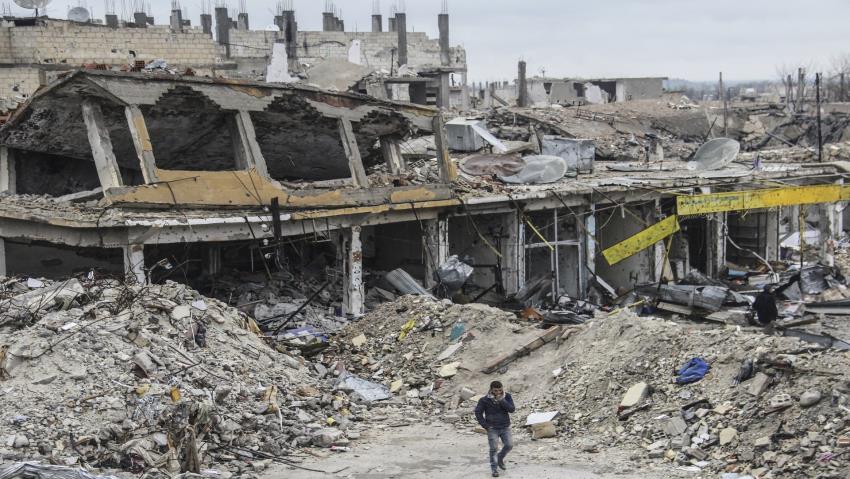 The report, prepared by the Damascus Center for Research and Studies and issued on Wednesday, indicated that the volume of internal debt for the country by the end of 2014 had reached about 3.4 trillion pounds — that is, equal to about 1.8 times the estimated gross domestic product for 2015. This was a result of the major rise of the budget deficit, which in 2015 reached about 604 billion pounds, thereby comprising about 39 percent of the national budget.

The inflation rate has also witnessed a sharp rise throughout the years of the crisis, which has left its negative impact on living standards for Syrians, which increased at a rate of 6.7 percent in 2011, 81.7 percent in 2013, 22.7 percent in 2014, and 36 percent last year. According to the report, the economic sanctions imposed on the country and the policies pursued by the government in partially lifting subsidies and the collapse of the exchange rate of the Syrian pound before the dollar have all played a role in the increase in the inflation rates.

In discussing the constituent sectors of the gross domestic product during the years of the crisis, the report confirmed that fundamental changes had occurred in this area, such as the decline in the relative weight of the agricultural, manufacturing, mining, building and construction sectors in favor of the government service sectors, transport and others.

As a result of the concentration of most military operations in the countryside and the severe damage of the infrastructure of the agricultural sector, the productivity of this sector has decreased greatly, while the experts who worked on preparing the report estimated losses to the agricultural sector of about 400 million pounds, which equals about 9.8 percent of the loss to the gross domestic product. Meanwhile the manufacturing and mining sector was subject to the greatest losses, as it lost about 2 trillion pounds — a number equal to four times the domestic product for the sector in 2010.

The sectors of trade and retail, transport and communications, and building and construction were not spared the effects of the economic disaster, as the report's estimates showed that the losses in these sectors at the end of last year registered, respectively, about 759 billion pounds, 402 billion pounds, and 187 billion pounds.

The center, which identifies itself as an independent research institution, concluded by saying that, “the continuation of the war will paint a grim picture for the country’s future, as a result of the dramatic decrease and the structural deformation in the structure of the national economy on one hand, and the economic and human cost which the country is paying as a result of this tragic situation on the other.”

It added that despite all of this, “The Syrian economy began to achieve some growth in some economic sectors as the economy adjusted to the crisis and because of the improvement in the security situation in some areas, which allowed the private sector to return to work and production, even if only to a limited extent.”