State media reports on visit by European politicians, where Syrian president asserted most European countries have harmed their own people’s interests through their support for terrorist organizations 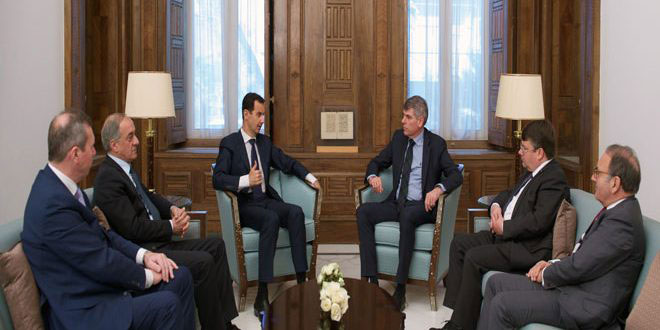 Most European countries have harmed the interests of their own people by supporting terror organizations in Syria since the beginning of the war, President Bashar al-Assad has stressed.

The Syrian president said that Western politicians’ short-sightedness has lead to the emergence of European policies that are dissociated from reality, which in turn has cast a shadow over the position and role of the European Union in the world.

His remarks came during a meeting on Monday with the visiting Belgian parliamentary delegation headed by conservative MP Filip Dewinter.

The Belgian delegation stressed that the Syrian army’s liberation of Aleppo has contributed to shifting the balance of power in the war against terrorism and to the changing attitudes of many Western officials.

Public opinion in a large number of European countries is witnessing a remarkable shift in attitudes toward developments in Syria, especially in Aleppo, the delegates said.

They clarified that their visit to Syria will contribute to helping the public receive a clearer image to face the lies being fabricated in Europe around the events in Syria.