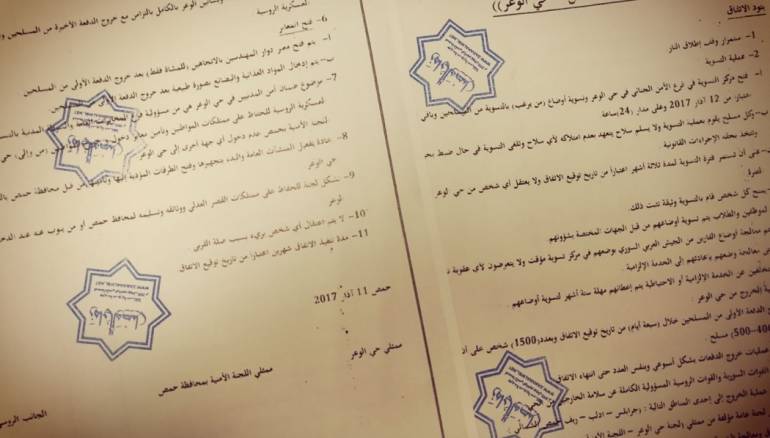 The deal includes 11 items, the first of which is the continuation of the ceasefire and a detailed explanation of how to attain a “settlement” process with the regime. From tomorrow morning the al-Mohandiseen crossing will be open to foot traffic and a center for “settlement” with the regime (for willing parties) will be opened in the criminal security branch, in the western part of the district, for three months. The deal also gives a six-month deadline to those in violation to enlist in military service or reserves in the regime army.

The deal sets a deadline of seven days for the exit of the first batch of those who want to leave the district, numbering 1,500 people, with about 400-500 fighters among them.

The deal stipulates that the regime and Russian forces bear full responsibility for the safety of those who leave the district toward Jarablus, Idleb, and the northern Homs countryside, while a tripartite council, composed of the regime, Russians, and district representatives, shall monitor the implementation of the deal’s items and address breaches.

The fifth item of the agreement stipulates that the seventh island which is on the southern outskirts of the district, in addition to Basateen al-Waer, would be delivered in whole to the regime at the same time as the last batch of Syrian resistance fighters and their families are exiting. The period for implementation of the deal was specified at just two months.

On the other hand, a source in Waer, who had attended most of the meetings which were held before the signing of the deal, expects that more than 15,000 people will exit the district under the terms of the deal, which is about 40 percent of the current population.

The source, called Abu Talal, told Zaman al-Wasl that the Russians had promised to deploy a military brigade of 60 to 100 people including Russian officers in the Waer district to protect them from Shiite militias who intend to storm the district immediately after the exit of the Syrian resistance fighters.

He indicated that those responsible for the deal on the regime side were General Deeb Zeitoun, head of the regime intelligence unit, the regime governor of Homs, and the security council in Homs.

He said that those responsible for the implementation of the deal from the Russian side were General Igor Konashenkov, the highest Russian officer in Syria who is in charge of the Heimemeem air base. He personally attended the negotiations for the Russians. It was also attended by his aide Colonel Rafael and Colonel Sergei, the Russian military official directly tasked with following the Waer issue and signing the deal.