Sheikh Rakan al-Khudeir, the head of the Army of Free Tribes, tells All4Syria that guarantor states have failed to commit to the cease-fire achieved in previous rounds of negotiations, leading to opposition groups boycotting the recent Astana talks 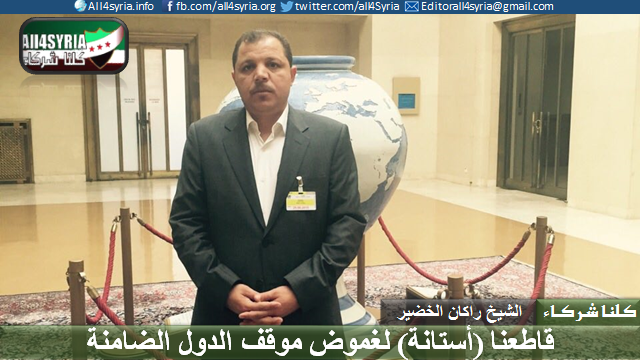 A great deal of ambiguity still surrounds the position of the rebel delegations in the Astana talks and the fifth round of Geneva negotiations scheduled to be held on March 23. Although a number of negotiating rounds having been held in both Astana and Geneva, no progress has been achieved and Russian warplanes have not stopped striking liberated areas, while the Syrian regime has pursued a policy of forced displacement in the areas surrounding the capital and in Homs' Al-Waer neighborhood.

Sheikh Rakan al-Khudeir, head of the Army of Free Tribes, said that leaving the stage of the international community would be a big mistake.

"It is important to deliver the voices and demands of the Syrian people to the entire world and thereby show that we are seeking a solution, while the regime, its militias and Iran are evading any solution," he said.

However, he added that Astana was a test of the sincerity of the Russian role in Syria. "We went to the conference so as not to leave the international stage to the Syrian regime and also for international recognition that there are demands for the Syrian people and that there is an opposition to the murderous regime," Khudeir said.

He continued to say that none of the demands of the opposition have been achieved so far and that forced displacement and demographic change continue to take place in Syrian towns and villages.

"There are still villages in central, northern and southern Syria that are under siege, for example the town of Mahajjah in Deraa where there are more than 30,000 residents, blockaded by the regime’s militias which threaten them with displacement and death from starvation," he said, adding that the opposition had boycotted the recent talks because of the lack of clear positions by guarantor states to put an end to these acts.

Regarding whether Syrian President Bashar al-Assad’s departure was still a precondition, Khudeir said that the regime’s departure is a major condition of the talks and that a transition of authority is the demand of all opposition groups. "There will not be any concessions from that. As for sitting with the regime directly, there is coordination among us as opposition and so far this proposal is not on our agenda. However, if the meeting aimed at surrendering power and for the regime's departure, we would meet in order to end the current tragedy,” he added.