Assad tells a visiting Russian-European delegation that the government will pursue two tracks to resolve the conflict in Syria, counterterrorism and the political process, stressing the importance of striking national reconciliation deals in doing so 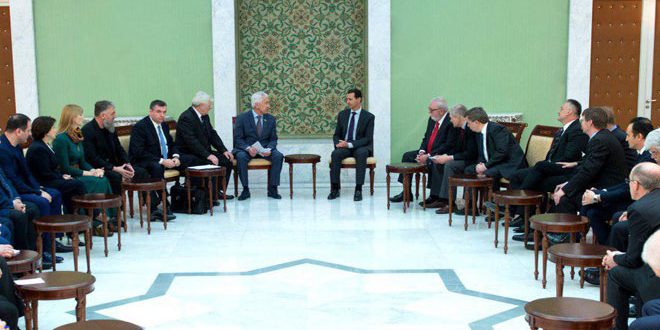 President Bashar al-Assad said in a meeting with a joint Russian-European parliamentary delegation on Monday that the government is pursuing two tracks to settle the Syrian conflict: combatting terrorism and reaching a political solution.

President Assad and the delegation, which is led by Vladimir Vasilyev, deputy chairman of Russia’s State Duma, discussed the latest developments in Syria and the situation of its people after six years of war.

The president said that the situation in Syria is a conflict between countries that seek to uphold international law, mainly Russia and China, and others that flout it by supporting terrorist organizations and interfering in Syrian domestic affairs.

Assad stated that the Syrian government is open to dialogue with any group that lays down its arms and abides by the constitution.

He added that the process of national reconciliations enjoys the support of the Syrian people and has rescued the lives of many and protected their areas. Without the people's support, the government would not have been able to proceed with the reconciliations, he noted.

The president also stressed the importance of parliamentary delegation visits to Syria, adding that what distinguishes this visit is that it is a joint delegation from Russia and Europe, and therefore provides a useful opportunity for dialogue with parliamentarians about their countries' policies on Syria.

In turn, members of the delegation stressed the importance of combining international efforts to fight terrorism, and mentioned that the stances of some European countries toward Syria have begun to change after the threat of terrorism reached their own countries.