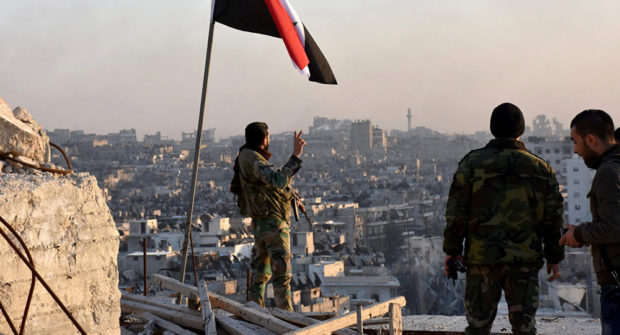 The move marks the first time the EU has blacklisted Syrian officials for the government’s alleged use of chlorine gas during the six-year conflict, although it previously accused one commander, Maj. Gen. Tahir Hamid Khalil, of deploying chemical weapons as part of repressive tactics in 2013.

The four military officials will be banned from traveling to the EU and will be unable to access any assets in the bloc or its banks, according to a statement by the EU published by Reuters.

The EU measures take the number of people under its Syrian sanctions to 239, as well as 67 companies.

EU sanctions also include an oil embargo, restrictions on investments, a freeze of Syrian central bank assets held in the EU and a ban on exports of equipment and technology that could be used against civilians.

An investigation by the United Nations and the Organization for the Prohibition of Chemical Weapons (OPCW) found Syrian government forces were responsible for three chlorine gas attacks and that Islamic State (ISIS) militants had used mustard gas, but Russians said that the results were inconclusive.

In February, Russia and China blocked a bid by the United States, Britain and France at the U.N. to impose sanctions over the use of chemical weapons in the Syrian conflict, saying it would harm peace talks.

The United States had already blacklisted 18 officials in January over the chemical weapons accusations.

Chlorine use as a weapon is banned under the Chemical Weapons Convention, which Syria joined in 2013.

The government of head of Syrian regime Bashar al-Assad, who has been under EU sanctions since May 2011, has denied his forces used chemical weapons.