SOHR reports at least 33 civilians killed in U.S. strike on a school sheltering displaced people in an ISIS-held town, while officials from 68 countries meet in Washington to hear Trump's plan to defeat the militant group 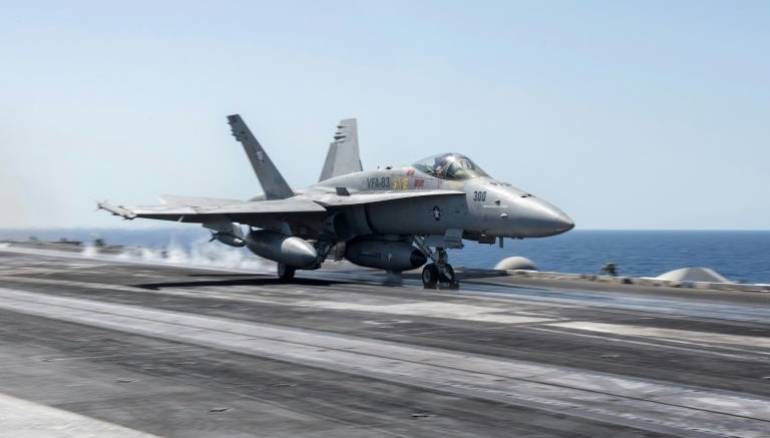 At least 33 people were killed in a U.S.-led airstrike on a school housing displaced people in an Islamic State-held Syrian town in the northern province of Raqqa, a monitoring group said Wednesday.

The Syrian Observatory for Human Rights said that the strike which hit Al-Mansoura town took place in the early hours of Tuesday.

Top officials from the 68-nation coaitiion fighting ISIS are set to meet in Washington on Wednesday to hear more about U.S. President Donald Trump's plan to destroy the jihadists' remaining strongholds in Iraq and Syria.

The U.S.-led coalition has been bombing ISIS since 2014 and is now backing a major offensive to defeat the group in Raqqa city, the Syrian heart of the group's so-called "Islamic caliphate."

The school which was hit on Tuesday morning lies about 30 kilometers (20 miles) west of Raqqa.

"We can now confirm that 33 people were killed, and that they were displaced civilians from Raqqa, Aleppo and Homs," said Observatory head Rami Abdel Rahman

"They still pulling bodies out of the rubble until now. Only two people were pulled out alive," Abdel Rahman told AFP.

The U.K.-based monitor, which relies on a network of sources inside Syria for its information, says it determines what planes carry out raids according to their type, location, flight patterns and the munitions involved.

Raqqa is Being Slaughtered Silently, an activist group that publishes news from ISIS-held territory in Syria, also reported on the strike. "The school that was targeted hosts nearly 50 displaced families," the group said.

Earlier this month, the coalition said its raids in Syria and Iraq had unintentionally killed at least 220 civilians. But other monitors say the number is far higher.

More than 320,000 people have been killed and millions more displaced since Syria's conflict erupted in March 2011 with protests against President Bashar al-Assad.

The conflict has since evolved into a multi-front war that has facilitated the rise of jihadist groups and drawn in international powers, including the U.S.

Trump has ordered his top generals to craft an accelerated strategy to "eradicate" ISIS' so-called caliphate, and allied countries are keen to learn more at Wednesday's meeting.

Coalition partners are expected to provide feedback on a revised anti-ISIS plan drafted by the Pentagon and presented to Trump last month.