As evacuations continue, Homs' governor urges all residents, including militants, to settle their legal status as part of the amnesty decree, adding that officials are ready to welcome all those back to the neighborhood who wish to get back on the right track 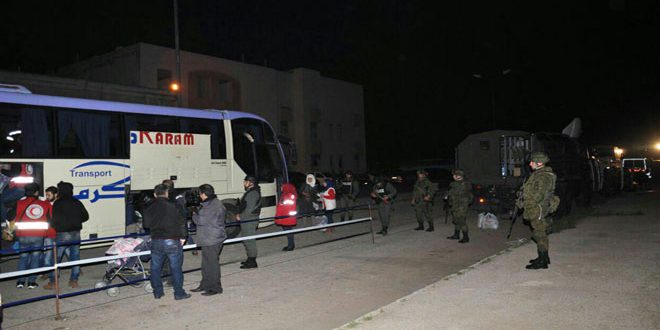 Hundreds of gunmen and their families left Al-Waer neighborhood on Saturday as part of the third phase of an agreement to evacuate the district of fighters and arms, and ensure the return of state institutions.

SANA’s reporter in Homs said that 50 buses carrying 836 gunmen and some of their families left Al-Waer neighborhood for the rebel-controlled Idleb countryside.

Homs Governor Talal Barazi told SANA that the relocation effort, which began in March, is aimed at restoring security and stability to the neighborhood and returning displaced families to it.

Barazi indicated that some of the displaced families have started to return to the neighborhood and that four schools have been reopened to receive the students who have returned.

The governor called upon the locals, including the gunmen, to remain in the neighborhood in order to settle their legal status as part of the amnesty decree, claiming that up to 700 people had settled their status over the past two weeks.

Barazi welcomed all residents back to the neighborhood, stating that even the militants and their families who already left the neighborhood in the first two phases of the relocation can return if they are willing. He said that the governorate is ready to welcome all those who want to get back on the right track.

He noted that seven militants and their families who left to Al-Dar al-Kabirah had already returned to Al-Waer and had their legal status settled.

Barazi said the positive atmosphere in Al-Waer over the past few weeks will further encourage people to stay in the neighborhood under the protection of the state.