Government forces bombard ISIS fighters on the outskirts of the Regiment 137 base in eastern Deir-ez-Zor province, killing 28, while a Nusra Front explosives cache is destroyed in central Homs, state media reports 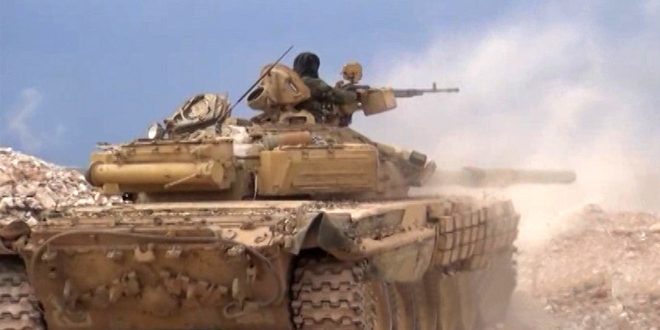 The Syrian army targeted gatherings and positions of militants from the Islamic State (ISIS) and Nusra Front in Deir-z-Zor and Homs provinces on Tuesday morning.

A military source told SANA that army units carried out concentrated bombardments against ISIS terrorists in the Al-Maqaber area, as well as the Jubaileh and Rashidieh neighborhoods, in the surroundings of Deir-ez-Zor's Regiment 137 base. Fighters were also targeted to the east of the airport and the electricity plant in Deir-ez-Zor city and its environs.

The source added that 28 terrorists were killed and 22 others were injured in the operations, in addition to destroying a rocket-launch pad and a machine gun-equipped vehicle.

In Homs, a military source told SANA that the Syrian army destroyed a Nusra Front explosives cache, including vehicles rigged with bombs, in Deir Ful village in the northern countryside of Homs province.