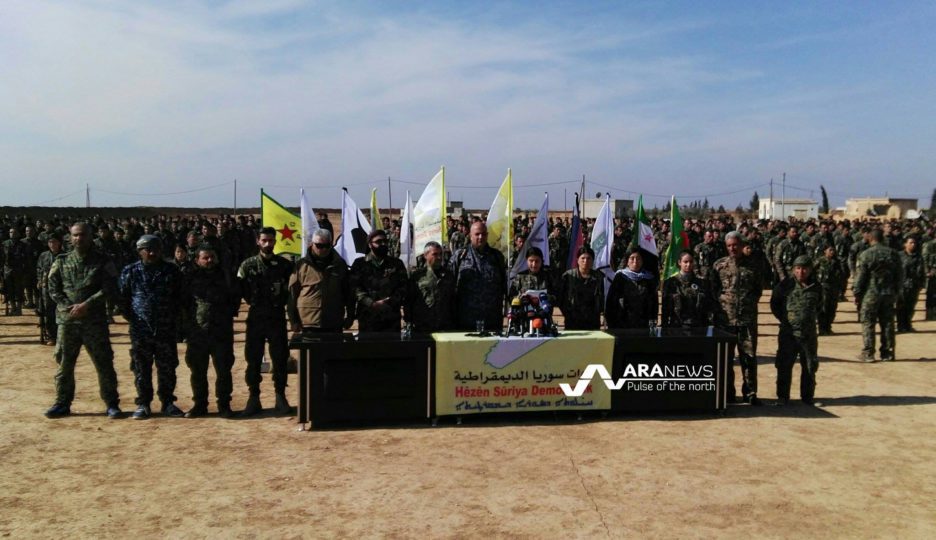 The command of the Syrian Democratic Forces on Monday announced their position on the “national initiative” launched by Syrian Arab and Kurdish activists aiming to “bring together” the SDF with Syria’s political and military opposition.

The items of the “national initiative,” which was launched by Arab and Kurdish activists on March 16, included:

The SDF command issued a statement saying: “We are aware of the sensitivity of the stage which Syria is passing through and of the need to form a united front in which all national and democratic forces participate to restore to the Syrian people their appropriate role over all the years that have passed and to restore to the revolution its momentum and push it forward and place it on the correct national democratic path in building a new, free, democratic Syria for all Syrians — Arab, Kurdish, Syriac, Assyrian, Turkmen and Chechen, Muslim and Christian, united from all sects and beliefs without exclusion or renunciation. From the start, we in the Syrian Democratic Forces have stressed many democratic and national fixed beliefs which we have expressed in the political documents and our adherence to them with clear positive results on every level.”

It continued: “We therefore value the efforts of an elite group of patriotic Syrian youth, who through publishing the main items of the national initiative, as it is called, have launched it aiming to ‘bring together the Syrian Democratic Forces and the Syrian opposition both politically and militarily.’ We consider it appropriate grounds which can be built upon through discussions, and enriched and developed to reach a structure which is appropriate for our people and provides them with a framework for a solution which will achieve their true aims and aspirations which they set out for.”

The statement concluded by saying: “We declare that we are ready to exert efforts and provide the potential for this framework, the enrichment of which will transform into a structure for all true democratic and patriotic citizens across all the geography of Syria in the people’s battle and the struggle to build a democratic, pluralistic, decentralized (federalist) Syria for all Syrians.”

Hundreds of Syrian activists, politicians and military figures from various classes of Syrian society have signed the “initiative.”

is article was translated and edited by The Syrian Observer. Responsibility for the information and views set out in this article lies entirely with the author.