State news agency claims government forces and allied militias are continuing to make gains against ISIS in Palmyra, as reports emerge of plans for a security zone around the desert city as well as advances against opposition fighters in a number of provinces across the country 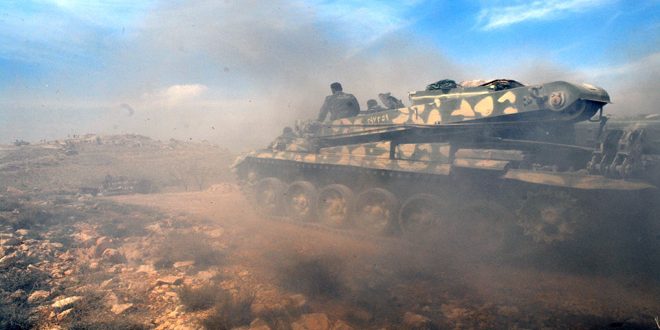 The Syrian army regained control over large areas to the south of Palmyra city as government forces continued their operations against Islamic State (ISIS) terrorists in the eastern countryside of Homs province.

A SANA reporter said that the army and allied forces advanced about 10 km toward the Khnaifis mines in Palmyra’s southern countryside after conducting large-scale military operations, killing and injuring scores of militants while others fled toward the Syrian Desert.

The reporter added that army units seized control of the Abtar Mountains and a number of surrounding hills.

Government forces foiled an attempt by ISIS fighters to infiltrate the eastern part of the Sinaah district of Deir-ez-Zor, killing more than 15 terrorists and destroying a mortar and machine gun-equipped vehicles.

The army also conducted operations against ISIS positions in the area around the Moazafin and Joubaila neighborhoods in Deir-ez-Zor, and in the surroundings of the Regiment 137 base on the southwestern outskirts of the city.

The Syrian army clashed with Nusra Front militants in the Daraa al-Balad district in Daraa city, killing a number of high-ranking fighters and destroying weapons and vehicles.

Government forces killed many terrorists and destroyed weapons and vehicles during operations against terrorists near the Maardes-Souran and Maardes-Tibet al-Imam crossings, and in the surroundings of Tal Skeik in Hama’s northern countryside, according to a military source.