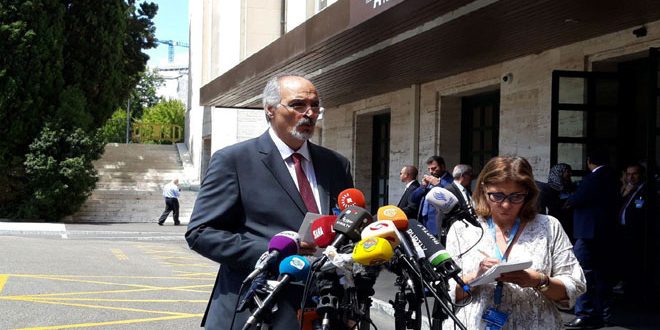 The Syrian government delegation, headed by Bashar al-Jaafari, held on Friday the fourth session of talks with United Nations Special Envoy for Syria Staffan de Mistura in the framework of the seventh round of the intra-Syrian dialogue.

Following the session, Jaafari told journalists that the latest round of technical meetings focused on combating terrorism as well as legal and constitutional matters.

“We talked about combating terrorism during three sessions with the special envoy and his team, and the closing session today was mostly dedicated to discussing counterterrorism,” he said, adding that he urged de Mistura to become more involved in presenting the issue to the U.N. Security Council.

Jaafari added that the government delegation drew the special envoy’s attention to the massacres caused by the international coalition around Raqqa and in Tabqa. These operations, he said, “have led to the drastic deterioration of the humanitarian situation, and when I speak about the deterioration of the humanitarian situation, I mean of course that of the civilians.”

“We add to that also the Turkish expansionist intentions in northwestern Syria,” he said.

Jaafari added that technical experts also dealt with the basic principles for the constitutional process included in the “12-point paper” aimed at reaching a political solution.