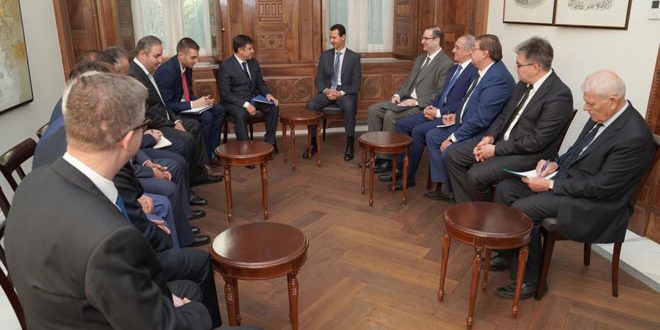 Countries which supported the Syrian people in their war against terrorism naturally should take part in rebuilding Syria, President Bashar al-Assad told a visiting Russian delegation of economic experts and business representatives on Monday.

Talks between the two sides touched on the strategic relations between Syria and Russia and the need to bolster economic cooperation and expand joint projects, particularly in the fields of petroleum, gas, phosphates, transport, pharmaceuticals and water resources.

The two sides also stressed the need to speed up the process of rebuilding what terrorism had destroyed in Syria.

Assad said that the return of security and stability to many areas due to the work of the Syrian and Russian armies has paved the way to reviving economic activity and starting the reconstruction process.

For his part, Russian Deputy Energy Minister Kirill Molodtsov said that participating in the reconstruction of Syria is one of the top priorities for many Russian companies, underlining the need to benefit from the huge opportunities to serve the interests of the two countries and their citizens.

Molodtsov added that Russia’s people, leadership, and government are determined to continue providing all sorts of support to the Syrian people until terrorism is eliminated from the entirety of Syria.