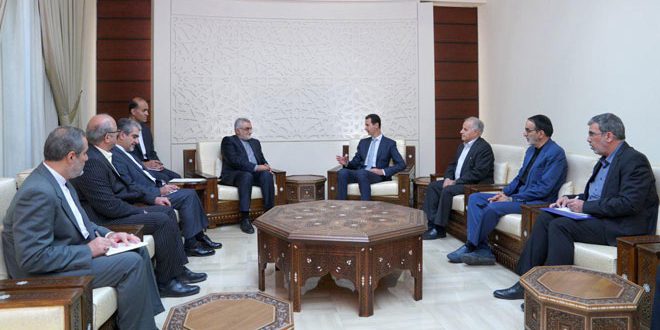 Syria and Iran condemned attempts to undermine the sovereignty and territorial integrity of any of the region’s countries, strongly rejecting the referendum held recently in northern Iraq.

In a meeting on Thursday between Syrian President Bashar al-Assad and Alaeddin Boroujerdi, the head of Iranian parliament's foreign policy committee, both sides stressed that confronting the dangers facing the countries of the region, especially the threat of terrorism, requires unity and harmony among all the region’s people.

Assad and Boroujerdi stressed that the recent developments in the region and the world cannot be separated from the fight against terror currently taking place in Syria.

The Syrian president stressed the importance of strengthening political action in support of the forces fighting against terrorism, calling for an expansion of forces to resist plots which seek to spread chaos and use terrorism as a tool to achieve foreign interests.

In turn, Boroujerdi said that terrorist organizations are being used as a spearhead to impose the projects of the West and Israel at the expense of the interests and future of the people of Syria and the region.