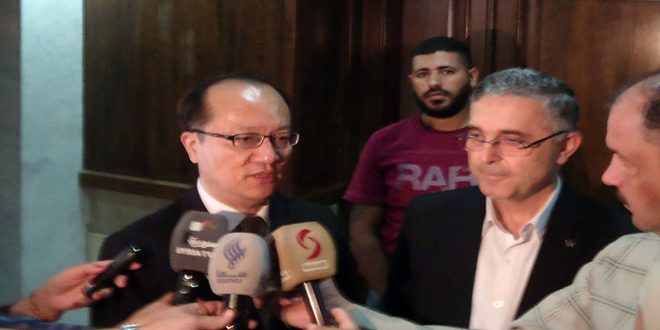 National Reconciliations Minister Ali Haidar has said China could play a key role in the reconciliation process, adding that Syria will need Beijing's help in the upcoming reconstruction phase.

During a meeting with the Chinese Ambassador to Damascus Qi Qianjin, Haidar said that local reconciliations are a solid foundation for launching the reconstruction project as they will help restore normal life and security to residential, industrial, commercial and agricultural areas.

In turn, Qi affirmed his government's support for the political process in Syria without external interference, voicing China's willingness to provide immediate support for the rebuilding process.

Speaking after the meeting, Qi said Beijing will provide immediate support to Syria in the reconstruction process, adding that his government is encouraging Chinese enterprises and companies to participate in reconstruction and make greater efforts in economic development and infrastructure projects in Syria.