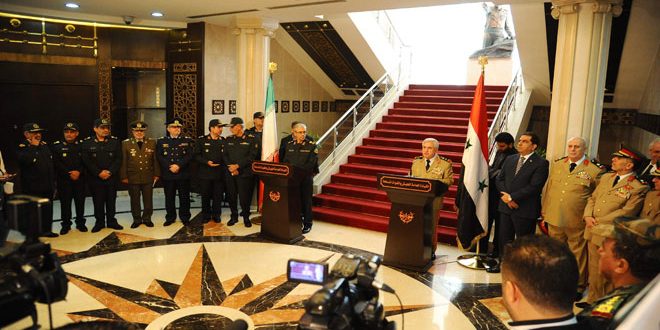 Syria and Iran have stressed Syria's right to confront illegal forces inside its own territory after a top Syrian military commander labeled Turkey's recent incursion into northern Idleb as an "act of aggression."

In a joint press conference following the talks, Ayoub praised Syria's military relationship with Iran, saying the role of the Axis of Resistance “will be further enhanced and its ability to face different challenges will increase,” stressing that the terrorist takfiri project is coming to an end and that the “decisive victory over terrorism is just around the corner.”

Ayoub said the victories of the Syrian army, with the support of friends and allies, are a source of concern to the supporters of terrorism, led by the United States, who are trying to hinder the army’s advance. This, he said, is done through direct intervention or by supporting affiliated militias and terrorist tools such as the Islamic State (ISIS) and the Nusra Front in order to prolong the war and to drain the Syrian army to benefit Israeli-American interests in the region.

Speaking on Turkey's intervention into northern Syria, Ayoub said Ankara has acted contrary to the Astana agreement, stressing that the presence of the Turkish forces inside Syrian territory is an "act of aggression that violates all international laws and norms."

"We deal with this presence as an occupying force, whatever their pretexts are, and we have the full right to confront it using all means,” he added.

For his part, Bagheri backed Syria's right to defend its territorial integrity, saying: “We are here in Damascus to stress our coordination and cooperation in the face of our common enemies of the Zionists and terrorists.”

“No armed force or formations have the right to enter the territory of another state without its consent, and those who violate that are considered aggressors,” he added.