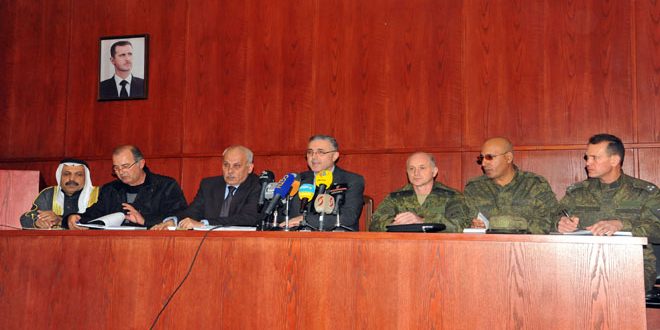 In comments during the meeting, Khamis said that Syria will continue its fight against terrorism in parallel with relaunching national production and preparing an appropriate environment to attract investments, all of which aims at reinvigorating the national economy.

Khamis highlighted the Syrian government’s keenness to strengthen trade exchange with Russia, while also voicing appreciation of Moscow’s support for the Syrian people in international forums.

For his part, Rogozin hailed the efforts of the Syrian government to overcome the obstacles caused by the terrorist war and its enthusiasm to rebuild what has been destroyed by terrorism.

He expressed his country’s desire to enhance its economic cooperation with Syria in all vital fields.

In a press statement following the meeting, Rogozin said that the Syrian government called on the Russian companies to participate actively in the reconstruction phase, adding that Russia is working to supply its own market with Syrian agricultural products while increasing exports of Russian products to Syria.