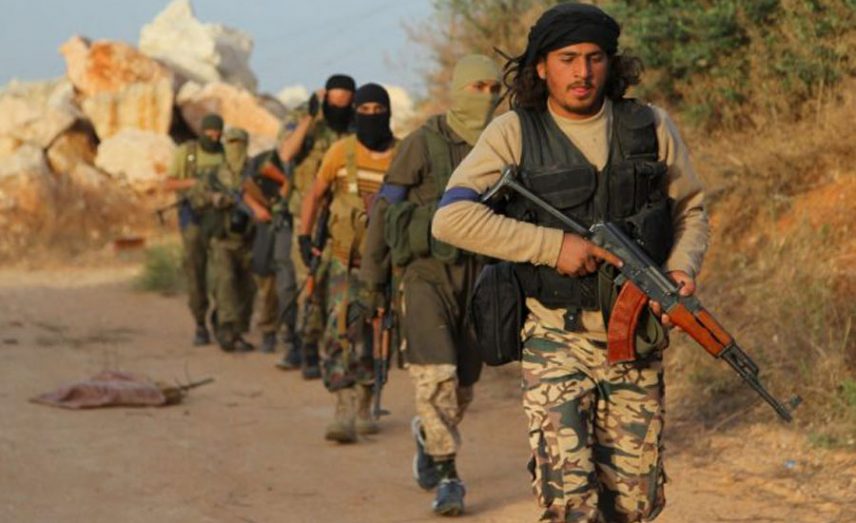 With the political track derailed as a result of the Assad regime’s stalling and fleeing from the necessary actions according to the principles of Geneva and United Nations Security Council resolutions, sights are turned once again to the field, where the regime, backed by Russia and Iran, has tried ceaselessly to seize control of opposition areas in northern Syria and the Damascus countryside.

Regime forces have escalated their attacks in an attempt to reach the Abu ul-Duhur military air base in eastern Idleb in preparation to march into the province and surround opposition groups in a narrow strip, in parallel and in coordination with attacks carried out by the Islamic State (ISIS) in the same areas.

For its part, opposition groups have carried out a broad attack on a number of regime positions northeast of Hama, taking control of the village of Al-Zalaqiyat and the Zalin checkpoint, while killing and wounding dozens of regime fighters and capturing a number others.

This military operation comes in the northern Hama countryside in which the Jaish al-Azza group of the Free Syrian Army participates with the Al-Hizb al-Turkestani and Jaish al-Ahrar, with the aim of reducing military pressure which the opposition groups are facing in the eastern Hama and southern Aleppo countrysides.

Regime forces and Russian warplanes responded to the attack with heavy bombardment on a number of areas of the Idleb province, notably Khan Sheikhoun, killing and wounding dozens of civilians, in addition to targeting some areas of the northern Hama countryside, especially the village of Al-Lataminah.

Opposition fighters, meanwhile, reached the gates of the city of Halfaya, and local sources said that a Russian brigade stationed in the city withdrew from the area entirely.

If the opposition takes Halfaya, it will threaten the city of Mahrida in which regime forces and allied Iranian militias are stationed, and upon which they depend for artillery fire onto opposition areas.

This attack comes in parallel with the policy of delay and evading political action which the regime is depending on in its negotiations with the opposition in Geneva, whereby it is trying to impose its control over all of Syrian territory, especially after the end of the “ISIS phase.” The regime is beginning to direct its views and forces toward the areas which the opposition groups control in both Idleb and the southern Aleppo countryside, and the eastern and western Ghoutas, in addition to southern Syria, despite all these areas being included in the so-called “de-escalation” zones agreement.

Regime forces and allied militias continued their attacks in northern Syria through two axes of the Hama countryside and the southern Aleppo countryside in an attempt to reach the Abu ul-Duhur air base in Idleb province, coinciding with similar attacks carried out by the ISIS group in the region with the aim of expanding the area under its control at the expense of rebel groups.

In the Damascus Ghouta, with the regime forces unable to achieve a breakthrough in its closest area, that is the eastern Damascus Ghouta and the area of Jobar, where it took heavy losses during its repeated attempts to storm this district, it is resorting to bombing the area daily with artillery and rockets accompanied by air raids.

The other front on which the regime forces and its militias are concentrated is the Western Ghouta, where it has been carrying out successive attacks for weeks, achieving some advances which has pushed opposition groups to announce a general mobilization to try to halt these attacks.

The regime forces are pursuing a scorched earth policy by targeting conflict areas with dozens of elephant rockets and heavy artillery shells.