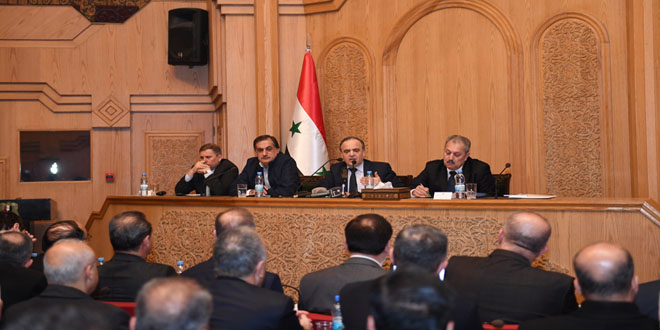 Members of a government delegation met on Saturday to review the strategies and work programs of state ministries to upgrade the services sector in Aleppo province.

Speaking at the meeting, Agriculture Minister Ahmad al-Qadiri said that additional amounts of money were allocated for rehabilitating the agriculture sector to ensure all requirements of agricultural production are met while providing services to farmers.

Health Minister Nizar Yazigi spoke about the significant role of health sector in maintaining all needs of the city, saying that the ministry provides vaccines to Aleppo and its countryside and to all Syrian areas.

Yazigi said that during the past period, a number of health centers were rehabilitated in the province, adding that five fully equipped health centers will be opened by the end of March this year.

A plan to make Aleppo an attractive tourist destination is also underway, according to Tourism Minister Bishr Yazigi, who said that a touristic service investment map for proposing new areas for investment in the reconstruction stage was also outlined.

Minister of Local Administration and Environment Hussein Makhlouf said that this year’s efforts will mainly focus on supporting investments in the city and renovating the citizens’ service centers.

Meanwhile, Minister of Petroleum and Mineral Resources Ali Ghanem said that his ministry will concentrate on supplying the province with its petroleum needs while eliminating all obstacles facing the just distribution of oil derivatives.

Electricity Minister Mohamad Zuhair Kharbotli talked about his ministry’s strategy for finding new power sources for feeding Aleppo with thermal energy, saying that a contract has been signed with the Iranian company Mabna to import five power generation stations with a capacity of about 125 MW.

Finance Minister Mamoun Hamdan spoke about encouraging production in Aleppo, confirming that new legislation has been issued to facilitate the granting of loans.

Water Resources Minister Nabil al-Hassan said that 61 billion Syrian pounds were spent on the projects in the province in 2017, adding that water pumps in Al-Babiri and Al-Khafseh had been rehabilitated and are working with full capacity.

Minister of Interior Trade and Consumer Protection Abdullah al-Gharbi said that the situation of bakeries in Aleppo is stable, adding that a number of grain centers will be ready for use in 2018, one of which will serve the Al-Sfireh and Jibrin areas.

Minister of Economy and Foreign Trade Samer al-Khalil said that his ministry is working on rehabilitating the free zone which was sabotaged due to the terrorist attacks.

Meanwhile, Industry Minister Mohamad Mazen Yousef said that his ministry had begun providing all requirements to public and private establishments in Aleppo, reconsidering the situation of companies to which security and stability were restored.

Yousef said that an integrated plan was set to rehabilitate those companies based on the available capabilities and priorities, adding that large numbers of industrial establishments had started production in the industrial areas.