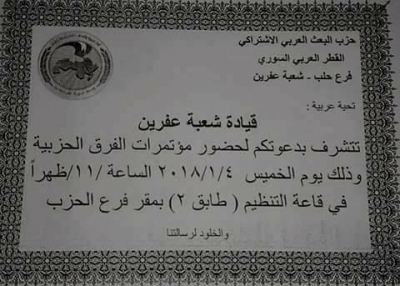 The leadership of the Syrian Baath Party’s Afrin division last week held its annual conference for its labor sections without obtaining permission from the Democratic Union Party (PYD) authority.

A source from the city of Afrin told Rojava News: “The leadership of the Afrin division of the Baath Party held its annual conference in the organization hall in the headquarters of the party in the city of Afrin, led by the division supervisor and the head of the economic workers’ bureau, Emad Eddin Hajj Daban, and attended by the head of the farmers’ bureau, Oria Hajj Ahmed, for its labor sections in the whole Afrin region.”

The same source added that Baath Party activities have been reduced since the Syrian regime surrendered government buildings and security centers to the PYD, but that the meetings have continued and information is provided through the periodic reports of the Baath Party members to its leadership without intervention from the PYD in its affairs.