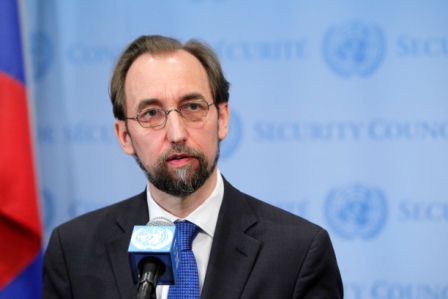 Syria’s permanent mission to the United Nations in Geneva has accused the High Commission for Human Rights (OHCHR) of distorting facts about events in Syria to serve Damascus’ enemies.

In a statement, the mission said: “Once again the High Commissioner touched upon the developments in Syria in a way that is filled with fallacies maneuvering the political and legal descriptions, which reflects the selectiveness and the irresponsible disrespect of the principles of impartiality and neutrality.”

“The latest statement issued on 10th of February by OHCHR — the most recent example in a series of provocative stances that are far from reality — are involved in the aggressive policies adopted by a number of states that made war in Syria an overt goal indifferent with the international law rules or the U.N. Charter based on the respect of sovereignty of states,” it added.

The mission stated that “the suspicious neglect of OHCHR statements for those states known for involvement in terrorism in Syria and the direct support to it and the continuous neglect of the U.S., Turkish and Israeli assaults on the sovereignty of Syria push us to wonder about OHCHR motives and the kind of the international move the Commissioner was talking about.”

It questioned the OHCHR’s objectives due to the selectiveness of its statements condemning military operations against Nusra Front terrorists, as well as its denial of the rights and responsibilities of the Syrian state in defending its citizens from daily terror and violence.

The mission said that the high commissioner and other U.N. employees continue to adopt aggressive stances in a selective and biased manner, allowing them to become partners in providing political cover to the aggression on Syria.