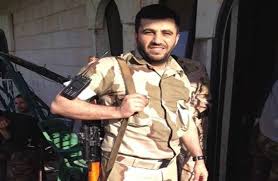 Regime forces have arrested a prominent commander of one of its militias, following clashes with the elite Tiger Forces, sources said on Tuesday.

Mahmoud Afifa was arrested along with 12 members of his militia after clashes with the forces of Suhail al-Hassan, the notorious general who was praised by the Russian President Vladimir Putin months ago fro his "bravery."

Afifa was captured in an ambush near the town of Qutaifa in the eastern countryside of Damascus.

His militia, which is based in Khneifees village, east of Hama province, has played a large role in fighting against the Islamic State (ISIS) group in the Syrian desert.

Recently, the Assad regime ordered Afifa's militia to join the Fifth Legion, which includes most paramilitary groups operating under the commanded of Syrian army.