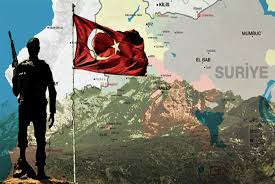 Syria reiterated its demand for the immediate and unconditional withdrawal of the Turkish occupation forces from Syrian territory, as their presence is a blatant violation of international law.

An official source at the Foreign Ministry said on Monday that Turkish officials have recently made statements about the end of the “security threat” posed by the presence of militants in Afrin, something that had been used by Turkish President Recep Tayyip Erdogan’s regime to justify its aggression on the Syrian city of Afrin, with these officials saying that upon the end of this alleged threat they will withdraw their forces from Syrian territory.

“If we take seriously for once the statements of the Turkish regime’s officials, which are deceptive and lack any credibility, the question that poses itself is: If the alleged security threat is gone, what is the Justice and Development Party government waiting for to withdraw its invading forces from Syria?” the source said, asserting that the presence of these forces is a blatant violation of international law.