The jihadist revealed he was waiting for further instructions from the ISIS command, Asharq al-Awsat reports 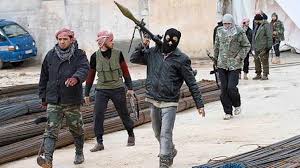 Police in Lebanon announced on Tuesday the arrest in the northern town of Zgharta of an Islamic State (ISIS) commander who was active in Syria.

The suspect was identified as a Syrian citizen born in 1982, said an Internal Security Forces statement.

The detainee acted as a military commander for the terrorist group in the central Syrian province of Homs.

He confessed to being "a military cadre" who took part in many battles in Syria, including the capture of the historic town of Palmyra, which the extremists held for months and destroyed some of its invaluable archaeological sites, said the statement.

He was arrested nearly two weeks ago after he had illegally entered Lebanon. He was captured by the security forces before he was able to contact any ISIS members abroad.

The suspect revealed that he came to Lebanon in early April in wake of the group’s defeat in Syria, revealing that he was waiting for future orders from ISIS.