A source in the Foreign Ministry said the U.S.' hostile stance affects security around the world, SANA reports 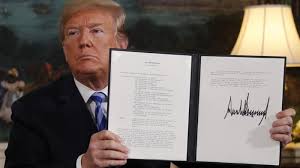 Syria strongly condemned U.S. President Donald Trump’s decision to withdraw from the nuclear deal with Iran, renewing full solidarity with Islamic Republic of Iran and expressing confidence in Iran’s capability to overcome the repercussions of the U.S. administration's hostile stance.

“Syria strongly condemns the U.S. president's decision, which proves once again the U.S. non-commitment to the international agreements and conventions,” an official source at Foreign Ministry said on Tuesday.

It added that the international reactions to the U.S. decision which condemn and denounce it show the isolation of the U.S. and its wrong policies, which would increase tensions in the world.

“Syria, which renews its full solidarity with Iran, as people and leadership, is confident that Iran is able to overcome the repercussions of the US administration’s hostile stance which affects the security of the region and the world,” the official source concluded.