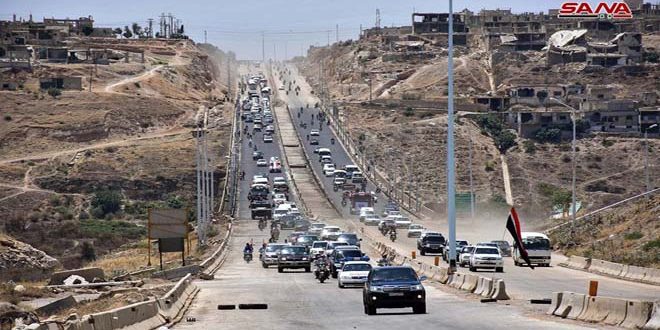 The Homs-Hama International Highway was re-opened after seven years. It had been closed after a number of terrorist attacks from groups positioned in the northern Homs and southern Hama countryside.

A reporter for SANA in Homs said that the maintenance teams ended the restoration works and repaired the damage caused to the international highway, which links the two provinces, re-opening the 47 km long highway after seven years of closure.

A number of the locals in the northern Homs countryside expressed satisfaction over the re-opening of the highway, believing that it will bolster stability and revitalize the economy and service movement in the villages and the towns of the area.

Speaking to SANA, Transport Minister Ali Hammoud said that re-opening the Homs-Hama international highway will link the northern and eastern areas to the central, southern and coastal areas, making it easier and cheaper for passengers to travel and goods to be transported.

The minister praised the sacrifices of the Syrian Arab Army who restored security to the area, also hailing the workers who redoubled efforts to repair the highway as soon as possible.

Head of Road Transportation in Homs, Mahmoud al-Ali said that the partial rehabilitation cost 555 million pounds and indicated that the remaining restoration works will be completed immediately with a total cost estimated at 2 billion pounds.

The Homs-Hama International Highway is a vital and strategic road. Re-opening it will allow for the commencement of movement between Syria’s northern, central and southern regions, which will positively affect the commercial, economic and public traffic, not to mention increasing the services provided to the villages, towns and cities adjacent to the highway.