Attacks on graveyards, funding for the White Helmets, an assault on Darra and diplomatic relations with Abkhazia. Catch up on everything that happened over the weekend 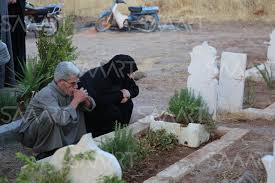 1. Syria's regime killed two people, when shelling targeted a graveyard in Hama, as locals observed an Eid al-Fitr tradition of visiting family members' graves during the holy month. Syrian activist Mahmoud al-Hamawi said three more people were injured when they visited the graves of family members at around dawn on Friday. Ten rockets hit the cemetery in the northern Hama village of Latamneh, which is contested between rebels and the regime, on the holy day of Eid, which marks the end of Ramadan. [Alaraby Al-Jadeed]

2. The US State Department announced on Thursday it will release $6.6 million in aid to the White Helmets, ending a brief freeze on funding to the Syrian civil rescue team. Funds will go to the White Helmets and the UN International, Impartial and Independent Mechanism (IIIM), which helps collect evidence on Syrian war crimes. "The president has authorized the United States Agency for International Development and the US Department of State to release approximately $6.6 million for the continuation of vital, life-saving operations carried out by the Syrian Civil Defense (White Helmets)… and the UN's IIIM," a statement from the US State Department read. [Alaraby Al-Jadeed]

3.The Lebanese Hezbollah militia backed by Iranian forces have stepped up its offensive on the southern Daraa province, killing five civilians, local sources said Friday. The artillery fire by the allies of Bashar al-Assad targeted the northern countryside of Daraa on the first day of Eid al-Fitr, an important religious holiday celebrated by Muslims worldwide that marks the end of Ramadan. The attack seemed to defy a warning by the US State Department on Thursday that stressed it would "take firm and appropriate measures" in response to Syrian regime violations in the designated de-escalation zone in Daraa and Quneitra. [Zaman Al Wasl]

4. Abkhazian President Raul Khajimba affirmed that Syria’s recognition of the independence of the Republic of Abkhazia is of particular importance and that his country is working with Syria and Russia to bring security to Syrian soil and peace to the whole world. Speaking to SANA’s reporter in Moscow on Friday, Khajimba said that “after the establishment of diplomatic relations between Syria and Abkhazia, we are now working to exchange diplomatic representation and open diplomatic and consular missions in the two countries. “Naturally, this cannot be done overnight, but we are confident that this will definitely happen. We have contacts with the Syrian Embassy in Moscow,” he said, adding that the bilateral relations between the two countries are deep-rooted. [SANA]

5. The Free Syrian Army's ‘Northern Storm Brigade’ arrested five of its fighters for firing indiscriminately in a park in the city of Izzaz (43 km north of Aleppo) in northern Syria. Saleh Amouri , a commander in the "Northern Storm Brigade" said in a statement that the fighters were stripped of their weapons and sent to prison, after they opened fire in a park. The shooting caused panic and fear among children and parents in the park during the first day of Eid al-Fitr. [Smart]